SEEDiA, the manufacturer of smart solar benches, is the first Polish finalist in the international competition Ideas From Europe, which takes place in the capital of Estonia. Poland was represented in Tallinn by Artur Racicki, SEEDiA’s co-founder. The grand finale will take place next year already! The Polish startup also received support from the Polish Ministry of Economic Development. 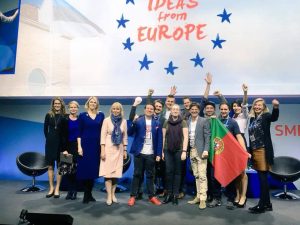 Ideas From Europe is an exceptional competition which evaluates ideas of startups from 28 countries of Europe. One of the three areas covered by it (next to personalized diagnostics and medicine) are renewable energy sources, which are SEEDiA’s core domain. Each participant of the competition presented his ideas during a three minute long presentation, followed by questions from the jury, which consisted of experts in various fields.

Artur Racicki presented the innovational brand, SEEDiA, which operates in Poland and produces smart solar benches in line with the idea of smart cities. By decision of the jury, SEEDiA entered the finals along with representatives of eight different countries – Belgium, Denmark, Germany, Ireland, Luxembourg, Netherlands, Portugal and France. “We are proud to be the first startup from Poland to blaze the trail at Ideas From Europe. For us, as a company with a mission, it is particularly important, since the competition also takes into account non-business factors, such as ideas and solutions that help the society and solve global issues”, says Artur Racicki, SEEDiA’s co-founder.

The last stage of the competition will be the grand finale, which will take place on April 28th in The Hague.

Ideas From Europe is an independent foundation, which aim is to collectively develop new solutions (new market projects) to global issues. It deals not only with business, but also value added (i.e. for the environment) and collaboration between various participants of society – entrepreneurs, investors, scientists, citizens and governments – in order to achieve a common goal.