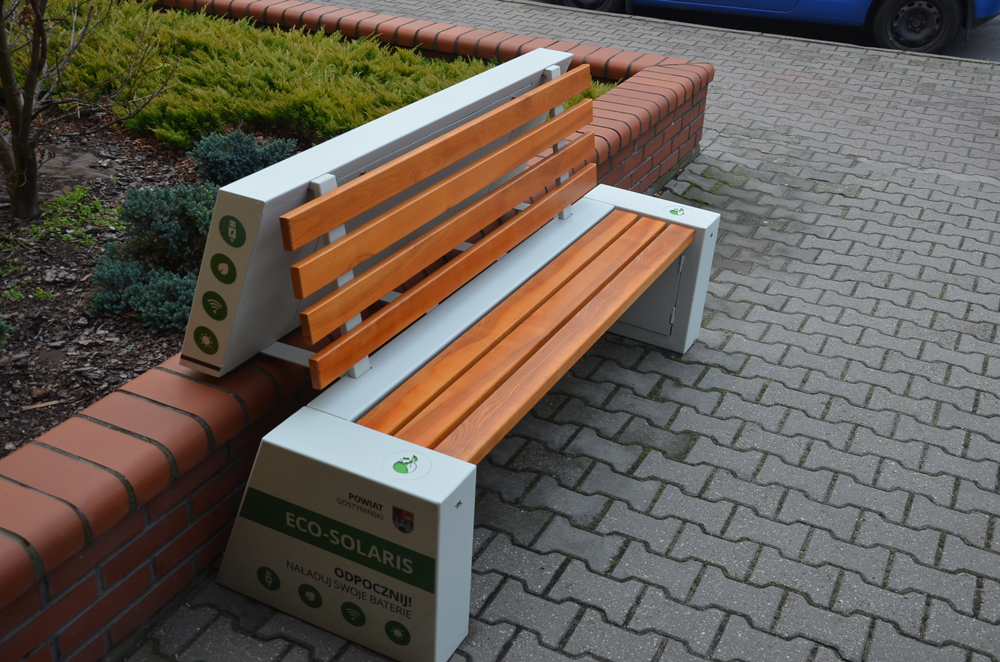 Smart bench from the URBAN line was recently installed in Gostynin. Its appearance is the first stage of collaboration between SEEDiA and the District Authority Office as part of the pro-environmental project ECO-SOLARIS. The aim is to educate the public on the subject of renewable energy sources.

Why SEEDiA?
– We chose SEEDiA due to its intriguing product design, flexible approach to the client’s needs and most extensive offer of indoor and outdoor devices, as well as our desire to support a young, Polish company – says Andrzej Wiśniewski, Head of the Department of Promotion and Development of Gostynin Authority Office. 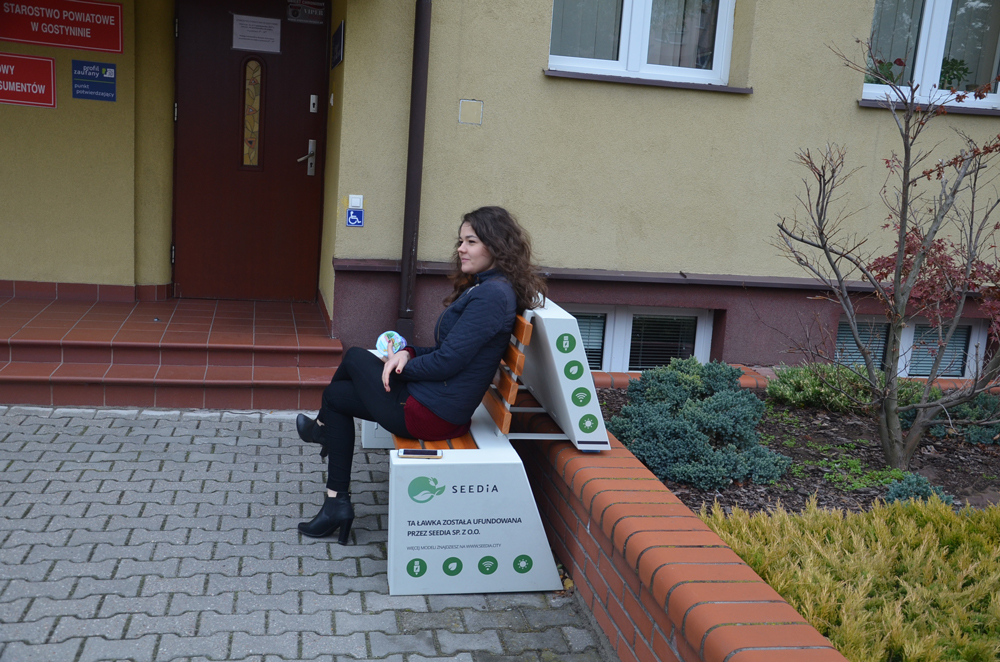 The solar-powered bench was placed in early October at Dmowskiego Street, next to the seat of the Authority Office.
The inhabitants of Gostynin can not only sit on the bench, but also use wireless internet and charge their smartphones.

According to Andrzej Wiśniewski, the main goal of the ECO-SOLARIS project is to educate the public on the topic of new technologies, including renewable energy sources. The installation provides educational role for the students of local schools and members of the local government. The county also conducted two editions of educational workshop “Oswajamy OZE” (“Taming Renewable Energy Sources”) for over 600 students from secondary schools.

– By creating a network of photovoltaic charging stations ECO-SOLARIS, Gostyń County fulfills the basic provisions of County Development Strategy until year 2020. To this point we launched the first 4 kW educational photovoltaic installation in Masovia, and received, and therefore saved, 10309 kWh – explains Andrzej Wiśniewski. 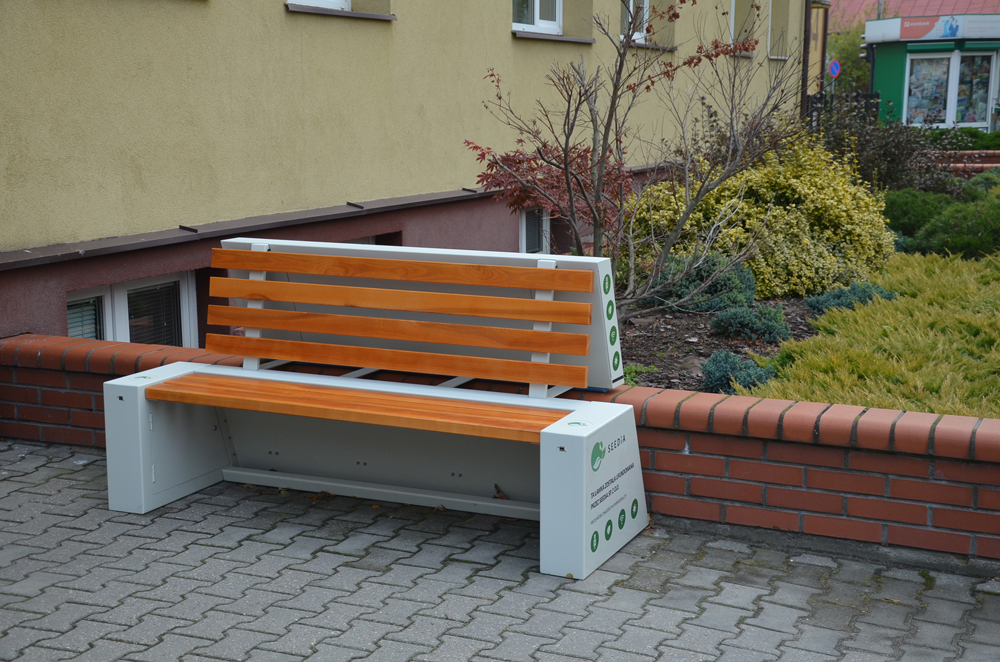 The bench is properly adjusted to its surroundings and inhabitants’ needs. – It was immediately approved by the youth from nearby schools. While they’re coming back home from school, the bench is completely occupied, and the two available phone charging ports are not nearly enough – he adds. Despite some uncommon opinions that the county should focus on building roads instead of smart city solutions, the local authority remains unbothered.

– he interest of people in the bench is best shown by the number of views on social media. After a week since placing the bench it has been mentioned by over 10500 inhabitants, which impacts our decision to continue developing the ECO-SOLARIS network – says Andrzej Wiśniewski. The aim of the project is to create a network of solar charging stations throughout the county. This way Gostynin joins the elite group of Smart Cities, which promotes modernity and development in prosocial areas. 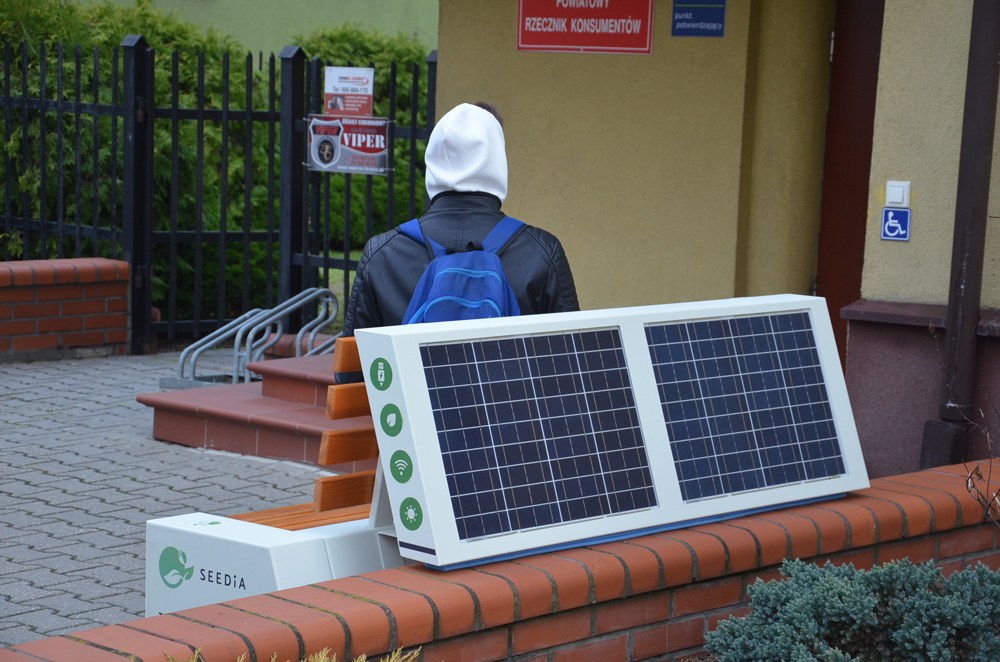 URBAN line benches are a flagship product of SEEDiA. It was created to exhibit both durability and intricate, modern design, thanks to which it is a great fit for urban architecture. The bench is made from steel and wood and equipped with a photovoltaic panel, which is secured by toughened glass.

– Gostynin is the second city in Masovia, only after Warsaw, to fit into the smart city trend supported by us. The county authority is in touch with today’s inhabitants’ needs. Thanks to mutual understanding our collaboration has been outstan – says Artur Racicki, cofounder of SEEDiA.